With the addition of Neil Finn’s sons Liam and Elroy, plus Mitchell Froom, the band’s first producer, Crowded house has added additional rooms in the house. After 11 years, Neil Finn and Nick Seymour has opened their house door for their new members to come in. The music of Crowded House has become part of ..

Summary 4.0 great
Rating 0
Summary rating from user's marks. You can set own marks for this article - just click on stars above and press "Accept".
Accept
Summary 0.0 bad

With the addition of Neil Finn’s sons Liam and Elroy, plus Mitchell Froom, the band’s first producer, Crowded house has added additional rooms in the house. After 11 years, Neil Finn and Nick Seymour has opened their house door for their new members to come in. The music of Crowded House has become part of those who grew up in the 80s, their anthemic song “Don’t Dream It’s Over” will always be one of those timeless songs that spark nostalgia when you hear it, and sometimes you just silently sing along to it.

The album starts with the track “Bad Times Good”, a dreamy song with the bass giving you this good vibe. A good opening track that sets up the what the album will offer. The next song “Playing With Fire” is the third single they released from this album. This is my favorite track, with the addition of the horn section, this song stands out with Neil singing those timely lyrics, “My wife is wild in quarantine/The chariman’s got it in for me/And my brain is getting closer to the edge/But I can’t explain that trip to her” reminds us all what we felt during lockdown.
“To The Island” their second single released from this album is an up tempo fun track. I love the vocal harmonies in the chorus. “Sweet Tooth” is probably the track that has that Crowded House signature on it. The fifth track is their first single “Whatever You Want” has for me an 80s vibe, it reminds me of those songs by the band ABC. The band went back temporarily in time and captured the essence of the past and brought it here. “Show Me The Way” a soothing song, the harmonies on the chorus is glorious. Be careful with this song it may put you in a trance, it just takes you away to another relaxing place. Track after track this album will get your attention with Neil Finn’s mastery of making melodious songs, now with some contributions from his sons. In the track “The Start Of Something” Neil sings “A world returning/It’s the start of something/It’s the start of something/I know it” as if declaring it is a new chapter in the Crowded House’s journey. This is not the same Crowded House that captured our hearts and ears in the 80s and 90s. The house has been renovated and added some additional fixtures. The band just bravely released this 12 track experimental album and declared, this is who we are now, we have grown.

I can't imagine the music world without the Tapestry album or a world without a Carole King. Considered as one of the greatest album of all time Tapestry is King's second album. Carole King's masterpiece features the 12 songs she wrote and co-wrote and were considered timeless songs... 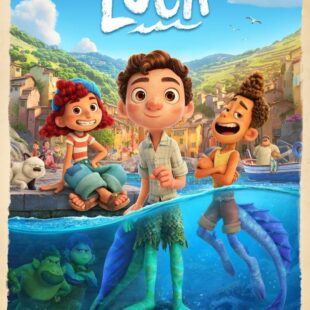 “Luca,” a Disney and Pixar original feature film set in a picturesque seaside town on the Italian Riviera, is a coming-of-age story about a little boy who has an extraordinary summer filled with gelato, spaghetti, and endless scooter rides. Luca shares these exploits with his new best friend, but the fun is put on hold by a dark secret: they are sea monsters from another world.